©Blessing Kene-Udemezue et al. PAMJ - Clinical Medicine (ISSN: 2707-2797). This is an Open Access article distributed under the terms of the Creative Commons Attribution International 4.0 License (https://creativecommons.org/licenses/by/4.0/), which permits unrestricted use, distribution, and reproduction in any medium, provided the original work is properly cited.

Harlequin ichthyosis (HI) is a rare genetic skin disorder characterized by dry, thickened, scaly, fish-like skin with an autosomal recessive inheritance pattern. It is the severest form of ichthyosis and is associated with poor survival. We report a case of HI that presented to our facility and highlight the challenges associated with the management of this condition in our environment.

Ichthyosis is a family of genetic skin disorder, characterized by dry, thickened, scaly skin with severe morbidity and mortality. The term “harlequin” derives from the facial appearance and the triangular and diamond-shaped pattern of the scaly skin. It occurs in about 1 in 300,000 births [1] and has no known sex predilection. The disorder affects the skin in utero causing thick, horny, armory-like plates that cover the skin with contraction abnormalities of the eyes, ears, mouth and appendages [2]. The first mention of the disease in literature was by Oliver Hart in 1750 in America [3]. HI is associated with the mutation of Adenosine Triphosphate Binding Cassette Transporter Protein A12 (ABCA12) gene on chromosome 2q33-q35 [1,4]. Recessive inheritances have been favored, and is supported by reports of consanguinity, hence genetic screening and counseling to at-risk patients should be considered [5]. The disease has a 25% chance of recurrence in subsequent pregnancies [4]. Death usually occurs in the first 3 months of life due to sepsis, temperature instability, feeding problems and respiratory distress [6]. Successful management requires a multidisciplinary approach from the onset [6]. With improved neonatal care and early introduction of retinoids, the survival rates have increased in developed countries [1,2]. This is however, not so in developing countries. We report the case of a 2-hour old male infant that presented to our facility with HI and highlight the challenges associated with the management of this condition in our environment.

Baby S.T, a 2-hour old term female infant who presented at the children emergency centre of the hospital with a history of abnormal skin and eversion of the eyelids since birth. Mother was a 26-year-old now para 2+0 (2 alive) woman in a non-consanguineous marriage. There was no history of miscarriages/stillbirths or genetic anomalies in the older sibling or any member of the family. She booked for antenatal care of index case at 20 weeks of gestation in a peripheral hospital. Booking parameters were said to be normal. Though fetal anomaly scan was not done, all other scans done in pregnancy were reported to be normal. She fell into spontaneous labor at 41 weeks gestation and was delivered of a live female infant who cried at birth. Birth weight was 3000g. At delivery she was noted to have generalized thickened and cracked skin on account of which she was referred to our facility. At presentation, examination findings revealed a neonate with skin covered by a yellowish, shinny cellophane-like sheath with erythematous fissures splitting the scaly skin and extending deep into the dermis, (Figure 1). All limbs were rigidly held in a semi flexed position with deformity of the digits. Fingers and toes were hypoplastic. Other findings on the head and neck included: bilateral ectropion, eclabium, flattened nasal bridge, bilateral anotia with plugged auditory canal. The eyebrow and eyelashes were absent with circumscribed balding. All other systemic examinations were normal. An assessment of Congenital Ichthyosis - the Harlequin type was made.

She was admitted and nursed in an incubator in an attempt to increase the humidity of the environment. Intravenous fluid was commenced in addition to enteral feeds which were given via nasogastric tube with expressed breast milk. Empiric antibiotics with ampicillin-sulbactam and Amikacin were also commenced. Baby was co-managed with the otorhinolaryngologists, burns and plastic surgeons, dermatologists, ophthalmologists and the social workers. Emollients were applied to the skin. Ectropion was covered with sterile eye pad soaked in saline solution and ophthalmic eye drops and ointments were also commenced. Samples were collected for baseline investigations as per unit protocol. Parents were counseled on the clinical condition, line of management which is conservative, the genetic nature and poor prognosis of the condition. They were anxious but willing to help the baby to get better. They were recommended for proper genetic counseling later and implications for future pregnancies. On the second day of admission the skin fissures were noticed to be oozing serous fluid which subsequently progressed to serosanguineous exudates. Fluid in-take was increased with monitoring of urine output. Unfortunately, the baby died less than 48 hours after admission from presumed sepsis. Results of baseline investigations that became available after the demise of the baby showed severely deranged electrolytes with hyponatremia (Na- - 126mmol/L), hypokalemia (K- - 3.2mmol/L) and severe acidosis (HCO3 - 12mmol/L). Complete blood count was not suggestive of sepsis; however, PCV was 31% and platelet was 18,000/mm3. Blood culture yielded heavy growth of Klebsiella pneumonia which was sensitive to the Cefotaxime and Amikacin. Skin biopsy and genetic testing could not be done and parents declined autopsy.

Ichthyosis is a group of diseases in which the homeostatic mechanism of epidermal cell kinetic or differentiation is altered resulting in the clinical appearance of scales. There are about 20 different types which are distinguishable on the basis of their inheritance pattern, clinical features, associated defects and histologic changes [1,2]. Harlequin ichthyosis is the most severe form of the disease and very rare. Our patient is the 2nd case of HI reported from Nigeria. The first was reported in social media of a woman who gave birth in Maiduguri, Northern Nigeria and both the woman and the healthcare providers took to their heels after the appearance of the baby [7,8]. Our patient had all the facial disfigurements characteristic of the condition: ectropion, eclabium, deformed nostrils and anotia. These facial disfigurements were also reported in the studies by Rathore et al [4] and Ahmed et al. [1], both in India. Kun-Darbois et al. [9] reported the classical facial features of HI. These disfigurements may contribute to the scare and abandonment exhibited by some of these affected family members. Our patient was not abandoned by her family, however, they were very anxious and needed reassurance and support which was provided by the managing team. With this encouragement they were willing and able to provide resources needed for the child´s treatment.

Inheritance for HI is via autosomal recessive mode which suggests a role in consanguinity among parents as a contributing factor [2,10]. Our index parents were not engaged in a consanguineous relationship and had no previous history such in the family. However, the other patients reported elsewhere in Nigeria had a previous history of delivering such an abnormal baby and was also engaged in consanguineous marriage [7,8]. Obu et al. [11] reported four cases of congenital ichthyosis, three of which were born out of consanguineous marriages in Nigeria. However, these infants may not have the harlequin type of ichthyosis as the report did not describe the classical armor-like plates of the skin in any of the cases rather the skin was described as semi-transparent and parchment-like. The thickened yellowish armor-like scaly skin is a distinguishing feature of harlequin ichthyosis [2]. Historically, HI used to be a uniformly fatal disease. The babies usually die soon after birth. Most of them die from severe dehydration, sepsis, respiratory failure, hypoglycemia, and renal failure [7,12]. With the recent advances in neonatal care in the developed world and multi-disciplinary approach to care, many affected babies can now survive to adulthood [1,2]. Nigeria is yet to attain this stage of advancement but with awareness creation and improvement in newborn care this category of newborns may have better chances of survival. The possible cause of death in this index patient was sepsis and electrolyte derangements. Though suspected, these were not confirmed till after the demise of the infant. This highlights the important effect laboratory support plays in patient management. Stakeholders should intensify all efforts to see that needed ancillary support is readily available and on time.

Diagnosis of HI is usually clinical at birth when the classical features are present. It is possible to diagnose HI during antenatal period, especially when the index of suspicion is very high [4,13]. Antenatal diagnosis is very important as it affords the caregivers time to plan for the child´s management at birth or provide the family with an option to terminate the pregnancy if desired [4]. Infants with suspected ichthyosis should undergo genetic testing for proper characterization and subsequent family counseling. Treatment of HI is majorly supportive adopting a multi-disciplinary approach. Our index case was managed by a team of professionals: neonatologists, nurses, Paediatric dermatologists, ophthalmologists, otolaryngologists, the orthopedic and plastic surgeons. These sub-specialties are required due to the many different complications that follow the disease. Respiratory support should be provided as appropriate. The eye lesions should be managed with eye ointments to prevent exposure keratitis and infection. Analgesics should be offered as the fissures and contractures can be sources of pain. Nutrition can be challenging due to the eclabium hence tube feeding may be started. Topical agents such as lubricating (e.g. petrolatum), hydrating (e.g. urea and glycerol) and keratolytic (e.g. Urea and salicylic acid) agents are the mainstay of management of HI [14]. Topical agents can be combined with systemic retinoids for treatment. The survival rate increases to more than 50% with an early prescription of oral retinoids [2,15]. This has become a standard of care in developed countries. Our patient did not receive retinoids as it is not available in the country. Topical administration of retinoids has also been described as beneficial when systemic retinoids are not available or tolerated [16,17]. Retinoids should be commenced within the first week of life and continued until 6 months of age [18]. Spontaneous improvement after the neonatal period has been documented [19], with improvement in the quality of life of the patients with supportive care [9]. Counseling with adequate daily skincare is of immense help in survivors. The need for parental and family counseling should not be over-emphasized and should be carefully done as caregivers may have a low threshold for abandoning such babies as several reports had shown. Sociocultural stigmatization is common and affected families need to be carefully followed up and supported.

Harlequin ichthyosis, the most severe form of congenital ichthyosis has a high propensity for mortality. Complications due to the lost skin barrier can set in very early. Aggressive supportive care from a multi-disciplinary team is required for effective management. There is also a need for awareness creation concerning the disease in both health care workers and the populace with the development of national guidelines for the management of HI.

Figure 1: index case with the characteristic features of HI

Figure 1: index case with the characteristic features of HI 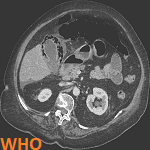 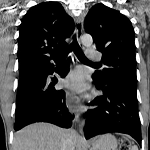 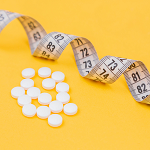 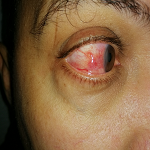 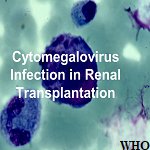 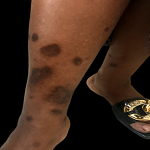